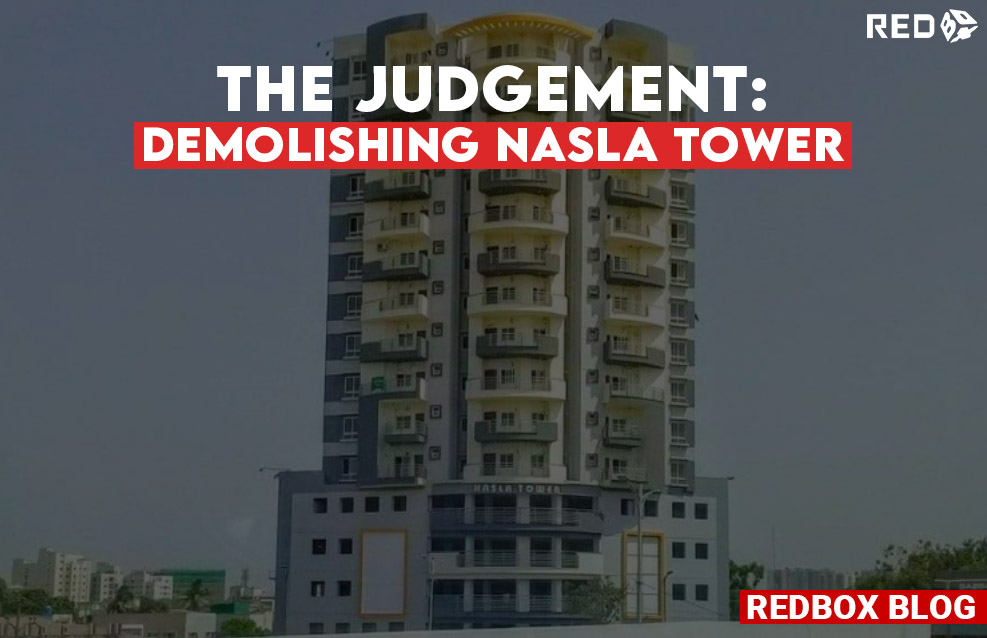 The final judgment has fallen upon the Nasla Tower. The case that went for over 5 months has been finally put to an end with a decision against the owners of the Nasal Tower. The Land was the main point of congestion.

So, how a famously built structure could be perceived as illegal if it is located near an important Shahrah-e-Faisal Road along with other important residential and commercial buildings, that are about just as same as Nasla Tower? Here are all the Answers.

The Supreme Court and Nasla Tower

The court decides based on laws, preceding cases, or sets precedents based on the individuality and rarity of the case. Since the encroachment has become a serious issue and many buildings, smaller structures were demolished and razed to the ground - this was expected to happen sooner or later.

The SC made a statement that ordered to demolish the whole building, as

“It was encroaching the land meant for service road”

The Nasla Tower had few defensive arguments regarding this. This treatment against Nasla Tower was also filed in the 1980s as well.

The defendant argued in the Supreme court that Nasla Tower was not built on the service road. Out of 1044 Sq Yds, 780 Sq Yds were legally allotted by the respective authority and the remaining area was obtained through authorities. The defendant claimed that they obtained the remaining part of the land as to how the other 23 owners did it for their part of their land.

The defendant claimed. That The Excess of allotted Land neither belonged to Government or private property. The Court wasn’t convinced.

The Facts vs Myths

The court was of the view that matter is more than the matter of private society. The Shahrah-e-Faisal near Sindh Muslim Housing Society is a key component that connects Shahrah-e-Pakistan, Tariq Road, and Quaid’s Mausoleum directly. With all the commercial aspects concerned, any encroachment had to be dealt with appropriately. The judgment further said,

“It is claimed that around 1957, the main road that was proposed to be 280 feet wide was realigned and as a result, its width was reduced to 240 feet and the excess 40 feet was allotted to Sindhi Muslim Cooperative Housing Society [SMCHS] through a letter by the chief commissioner in December 1957.”

The defendant questioned the reports, with their viewpoints as the truth. They requested the court to properly address the matter by considering them.

They wanted and requested the court to appoint officials to inspect and investigate the building. They wanted the officials to even find out whether the building is built on the service road or the respective plot. Therefore the matter of encroachment could be solved.

The placement of such a plea puts the defendant at risk as well, since the findings are absolute and are directly readable by the court therefore no counter explanation could be justified if it backfires.

It is a matter of fact that the court can engage the request and build a team of court officials to entertain the notion.

The court however made a decision regardless of the request. The Karachi Commissioner was directed by the court to remove all the people from the building and take its possession immediately.

The current owner eventually acquired it through a conveyance deed executed in 2015. Initially, the plot in question was intended for residential purposes, but in 2004, the then-city government through a resolution allowed conversion of all residential plots on Sharea Faisal for commercial use, and the plot was converted from residential to commercial use in 2007, it added.

The owners of the tower claimed that SMCHS allotted the additional area through a resolution in 2010 and that it was included in the total area of the plot, whereas the mukhtiarkar stated in his report that SMCHS illegally increased the size of the plot by allotting the land reserved for the service road. According to Dawn,

“The lawyer for the builder argued that two letters were issued in 1957 by the assistant secretary to the chief commissioner, Karachi about allotment of the 20-foot-wide land strip on both sides of the main Karachi-Malir Road (now Share Faisal) in front of the land already allotted to that society on payment of the full market price.”

The bench did not accept the arguments presented as it failed to convince the court on two points. The first was the nature of the letter issued by the SMCHS. These letters did not have the effect of modifying, amending, or substituting the lease deeds, as being executed and registered by SMCHS, in favor of original allottees.

A Quick Sponsor: If You're looking for an investment opportunity, there are Plots for sale in the ASF housing scheme. Then consider looking into our catalog of projects that are exclusively sold by Redbox!